Guyana has a region called the Potaro-Siparuni Region. In this area lies Kaieteur National Park. It is a lush, biologically diverse centerpiece of the region.

It is a diverse place for animals and sparsely populated by humans. In fact it is one of the four pristine rainforests left virtually untouched. Although there have been attempts to mine for timber, they have been squashed by conservationists. 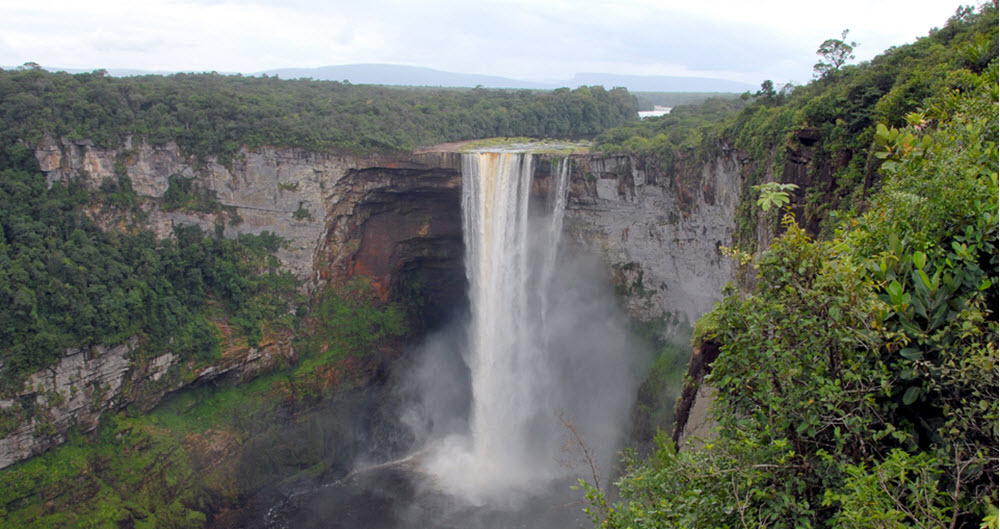 Kaieteur National Park is in the center of the Guiana Shield. This is considered the highlands of Guyana. There are enormous table-top mountains with the prestigious honor of being the oldest surfaces on the earth. The park is located in the middle of the Pakaraima Mountain region within the Guiana Shield.

The parks beauty and appearance has not changed much from when it was first discovered by Barrington Brown in the late 1800’s. He found the falls, along with his partner James Sawkins, while on a trip to survey the land for the British Guianan Colony. In the 1970’s the parks size was decreased to accommodate mining efforts but then increased to protect it again.

Sitting on the Potaro River, Kaieteur Falls is the most notable of sights to behold in the park. It is also the most visited sight in the park, being the largest single drop waterfall in the world by volume of water at 822 feet. It is one of the most spectacular waterfalls in the entire world, located where Mount Roraima meets the lowlands.

Kaieteur Falls is named after Chief Kai, who plummeted to his death by canoeing over the falls in order that the Great Spirit would be satisfied. He did this in hopes that the spirit would protect and save his tribe from being destroyed by a group of Caribbean savages. Legend states that he and his canoe became part of the rock formations.

Mount Roraima is also one of the sights to behold as it is a spectacular table top mountain complete with crystal pools, rock formations and waterfalls. It is also home to the Valley of Crystal. Climbers and trekkers can see on the tabletop small lakes and beaches around the canyon.

There are also some notable sights to see like the Guianan Cock-of-the-Rock bird known for its plumage, the threatened golden dart tree frog and red howler monkeys. There are many bat species, macaws, parrots, Merlin’s and antbirds to name a few. The giant river otter, bush dogs and kinkajous live here.

Although eco-tourism is an industry on the rise, Kaieteur National Park is still a virtually untouched and undiscovered place. There are still areas of the park that have not been studied and documented. If you are a nature lover, this might be music to your ears, much like the water falling from Kaieteur Falls.